I finally did it! I have successfully created, crafted and produced the delicate birthday gift art for my most loveliest friend, I Sing the Body Electric! This marks gift art #3! If anyone has ideas or would like the next gift art, send me a comment my way or I’ll be picking through my followers 😉 And probably some of the people I follow too. 🙂

FIRST! I’ll link to the reference images I used:

Now, we’ll get into the completed piece: 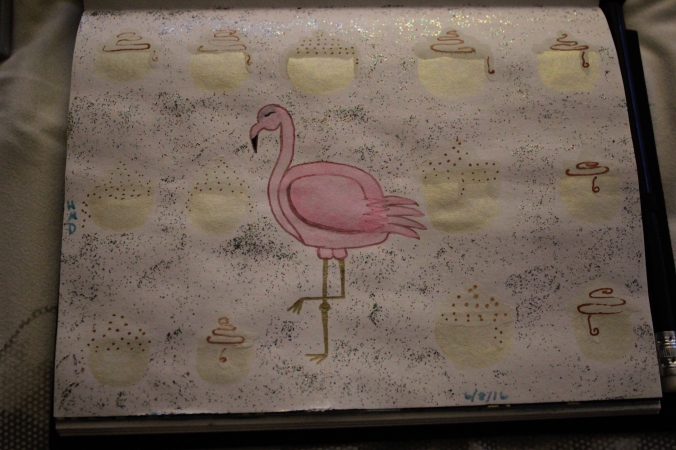 A title for this piece is harder to come to mind, but here’s what I’ve come up with:

“The Essence of Body Electric”

Flamingos are B.E’s favorite creature, and as two badass bitches, we’d have matching flamingo costumes–the better to peck people with! 🙂

In the background are cinnamon buns, which is one of our many inside jokes together. ❤ And the rest of the background I used my glitter paint for because Queen B.E makes me smile and feel loved and happy and honored to be someone who has gotten to know her. She is a warrior, an emotionally raw human being, who has been through some awful tragedies that were never her fault and were dealt by hands that were meant to protect her. She is a fighter, though, and she is a SURVIVOR. Her posts are unedited, flawless accounts of human survival through the toughest shit imaginable. She is a wonderful, caring, honest human being, and I genuinely recommend following her as she is amazing and will give to you her honest truth, without fear or shame. She is an honorary soul here. ❤ ❤ ❤

A central shot of the flamingo. ❤

Up close shot of the cinnamon buns and glitter. 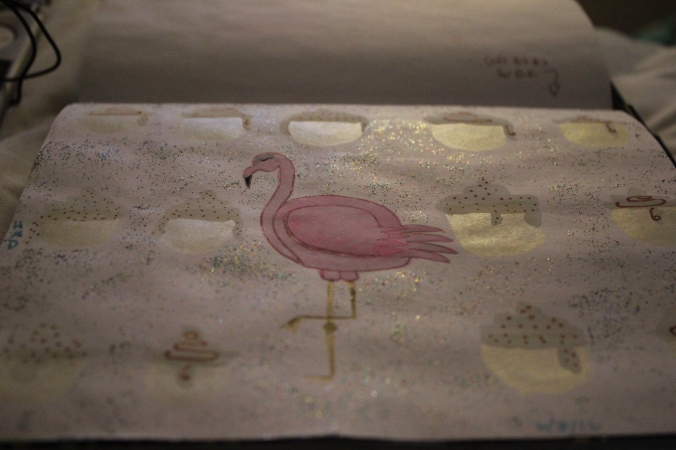 Another perspective of the flamingo

And here are some of the WIP pictures! (Note, the flamingo is as pink as above my phone just didn’t pick up on the pigment)

Welp! That’s all from me for this post!! I’m going to do another post in just a few minutes about some teachable recovery stuffs. 🙂 Starting with some art therapy work I have!

I hope everyone enjoys the different style of this post! The slideshow option is pretty cool and oh, I should mention, I used watercolor, glitter paint and metallic pens for this piece! It was quite fun to make, although I pushed it off for a while since I was a bit intimidated by it! My first ever flamingo drawing! ^^ I’m learning how to carve out a style of presentation for these gift arts, so it’s all a work in progress!

Sending you positive thoughts and many hugs, hun!! ❤

(Also, if you want to get one next, let me know!! I will be more than happy to make you something. :))

So the start of this post will be a little wobbly. I have a new understanding from chatting with my Mom today about the OCD and all of its secrets, and feeling empowered and strong, I’d like to discuss them with you all. ❤

I went to the OCD support group yesterday evening at McLean Hospital in Belmont, MA. There was a lecture given by a woman named Mandie (I don’t know if I can disclose her real first name, so we’ll call her Mandie for now) and her journey from homebound to here, a journey of struggle, yet hope and determination through living with OCD.

I was captured by this lecture. I gave her a thumbs up before she presented, it was only her second time presenting so she was nervous, and I wanted to signal a boost of confidence 😉 I was in a very good, blogging world love type of mood.

She discussed at length the long journey and struggle she had with the OCD, with cleanliness and trying to protect her loved ones from harm by going through her compulsions etc. She became homebound for two years, unable to leave her home, and through getting treatment at the OCD-Institute, she was able to begin trusting and opening up about her OCD struggles so that she could begin the road of recovery.

Here is what she mentioned were key in her recovery:

Which I especially enjoyed as Queen B.E told me that same day that I was like a lighthouse throwing out light 🙂

Mandie still has trouble opening up to people about her journey with OCD, having fears facing the stigma of a mental illness and what people may say in reaction to her confession (that typical and horrid “Ohmygerd me tooo, I have to organize it like X and Y and it’s really just TENDENCIES” Damn you people)

However, she is a BRAVE and ADMIRABLE soul, who is learning new ways of managing her OCD and punching it in the face and not letting it rule her life like it once did. She is a WARRIOR and a SURVIVOR. She is amazing. I wish her ALL THE BEST in her future journey through recovery. ❤ ❤ ❤ ❤

After the lecture, our OCD support group started a bit late. Everyone did the usual of saying who they were and a little bit about why they were there (which I obviously can’t go into myself here). Some people began expressing the victories and issues they’re still having with their OCD, and there was some mutual bonding about that, and then I raised a question I had about my own struggles with the OCD.

Most of the time, these days, I find I am not anxious or fearful or guilty at the thought of the OCD. I find I can get excited about the notion of talking about it, with the OCD wanting that attention and wanting me to keep fixating on it and chatting or writing or drawing about it. I find I feel like a fraud. I am not suicidal at this point in time, and I am not depressed in this point in time (if anything I think the depression is well controlled under the medication I’m on) yet I feel I COULD still act on a thought of harm just for the shits and giggles. I feel that puts me to shame because there are people out there in emotional pain and struggling, turning to suicide in desperation, whereas I am sat here, not suicidal, not in emotional pain, yet still struggling, just in a different way.

I am under the glorification umbrella concocted by the hands of the OCD. To quote the definition of glorify:

I have felt that death by suicide is meant to be my destiny. That it felt right to die by my own hand. That it was poetic and a fitting ending for my life.

I find myself feeling some type of misunderstanding when trying to explain this OCD mixture to others with the same condition. I can understand the anxious response, yet I can’t completely relate as that’s not my experience. Similar to them trying to relate to me. I feel inherently that when I ask a question framed in ‘What if…’ or ‘I could…’ that it gets taken into the context of OCD. Which it is, and it isn’t, and it still is.

Then this stirs up feelings and old beliefs within me that in order to prove I am serious, that it is MORE than OCD, that I must act upon my suicidal or self-harming thoughts.

Yet, it is this VERY same issue that just shows how it is ALL about the OCD, still.

I may not have a predominantly anxious response to the OCD anymore. I may get excited, make inappropriate jokes, have inappropriate affect, be calm and everything else in between.

YET I STILL have OCD.

My Mom suggested this idea to me, and I think finally, after over a year of this condition, that it FITS and MAKES SENSE:

Are you following me?

When Mandie engaged in the compulsion of showering to cleanse herself, she was doing so under the guise that if she did what the OCD told her (to shower) that she would feel better and her loved ones would be safe (the lie). The truth, of course, is that it was all bullshit. The OCD can be satisfied only for so long.

When I engage in the compulsion of scratching myself or trying to kill myself/accessing methods/anything along that spectrum, I am doing so under the guise that if I do what the OCD tells me (to hurt myself) that I will feel better and the OCD will go away. The truth, of course, is that it is all bullshit. The OCD can be satisfied for only so long.

So, after all, the glorification I experience in my life from the OCD, CAN be applied (with some basic manipulation) to all other cases of OCD.

I CAN relate after all! I am not alone.

My recovery journey involves going against the beliefs of the OCD. That means no self-harm, no killing myself. Which is great, ’cause I quite enjoy life!

I think from here, my recovery and ERP work will involve some CBT techniques to break down the glorification and understand the genuine realities of self-harm/suicide, exposing myself to the actual aftermath of what suicide leaves behind (and all the tears and emotion that comes with that) and not allowing myself to act on those compulsions.

It won’t be easy, yet it’s a starting point.

Stay safe, and if you have thoughts on this topic, I’d love to hear them! ❤

“Rest your eyes now, take my hand, even heroes fall down

now and then… You don’t have to be superman.” – Superman by Rachel Platten